"...with cold brew, since you’re not necessarily worried about scalding your mouth, you can just slam it and pedal through your caffeine buzz."

As we head into the end of 2020 after what has been paradoxically the longest and shortest year in recent memory, it’s time to start thinking ahead to 2021. For many, a New Year Resolution sets the stage for big changes in the coming year. A new year is a fresh start: it’s three hundred and sixty-five days full of potential, and resolutions are a great way to let your desires be known before you start down your path to actualization.

Your resolutions might be food related and physical-health related: maybe you’re resolving to cut carbs, to drink less soda, or to make more meals at home. Perhaps you want to work on your mental health by reducing screen time and reading more, journaling, spending more time in nature, or seeing the world. (Well, that last one might be on hold for a little while.) It could even be that you want to refine your coffee palette, drink more coffees, or maybe you just want to make perfect coffee at home.

While Compass can’t help you consume less carbs (we totally love croissants and pastries way too much), we can definitely help you grow your taste for coffee, recommend different coffee origins to try, and give you some ideas about the ways in which you can be more sustainable using coffee. 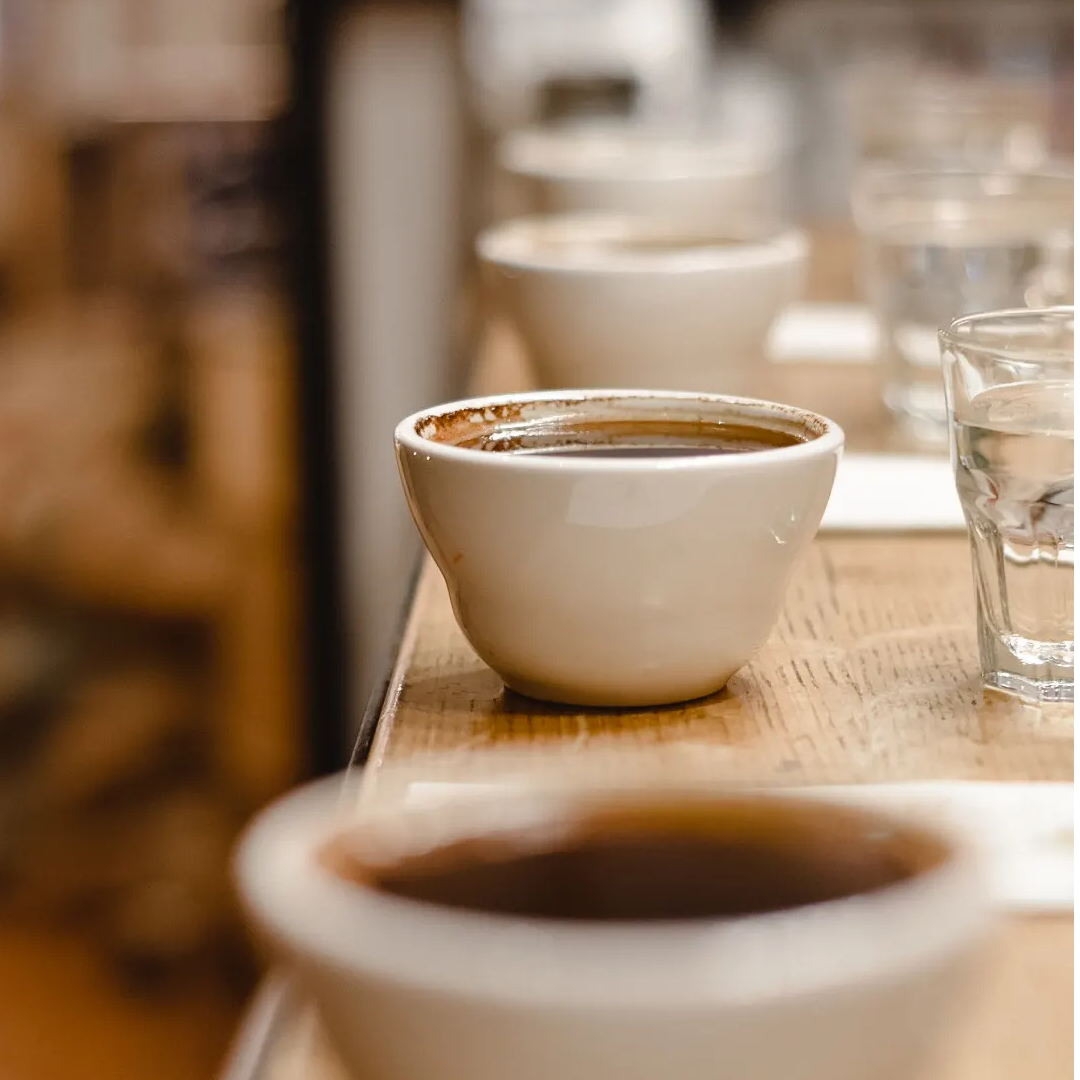 Our Roasters "cup" coffees to accurately measure the taste. We still lead cuppings at our Roastery on 7th Street, in Shaw, whenever we're able.

The best way to expand your palette is to drink more. It’s as simple as that.

While drinking more coffee will definitely help you stay caffeinated, being mindful about what you’re drinking and the coffee’s effect on your senses will allow you to better identify tastes and aromas. Due to agricultural, processing, and environmental differences, coffees from different regions have different base characteristics that affect flavor; for example, beans from Honduras taste different than beans from Ethiopia. Add different roast levels, individual roast profiles, and a whole host of other variables into the equation and it's not surprising that coffee invariably tastes different from mug to mug--even if they’re from the same growing region!

The World Coffee Research Sensory Lexicon identifies 110 different coffee aroma, flavor, and texture attributes. While very few people outside of those who have dedicated their lives to producing, tasting, and grading coffees are able to detect most of these flavors (see, for example, Butyric acid and Isovaleric acid), being mindful of your coffees’ aroma and taste can help you see connections to the flavors you are familiar with. And of course, experiencing expanding your own lexicon will give you a better library of flavors to compare your cup against.

The Compass for your journey 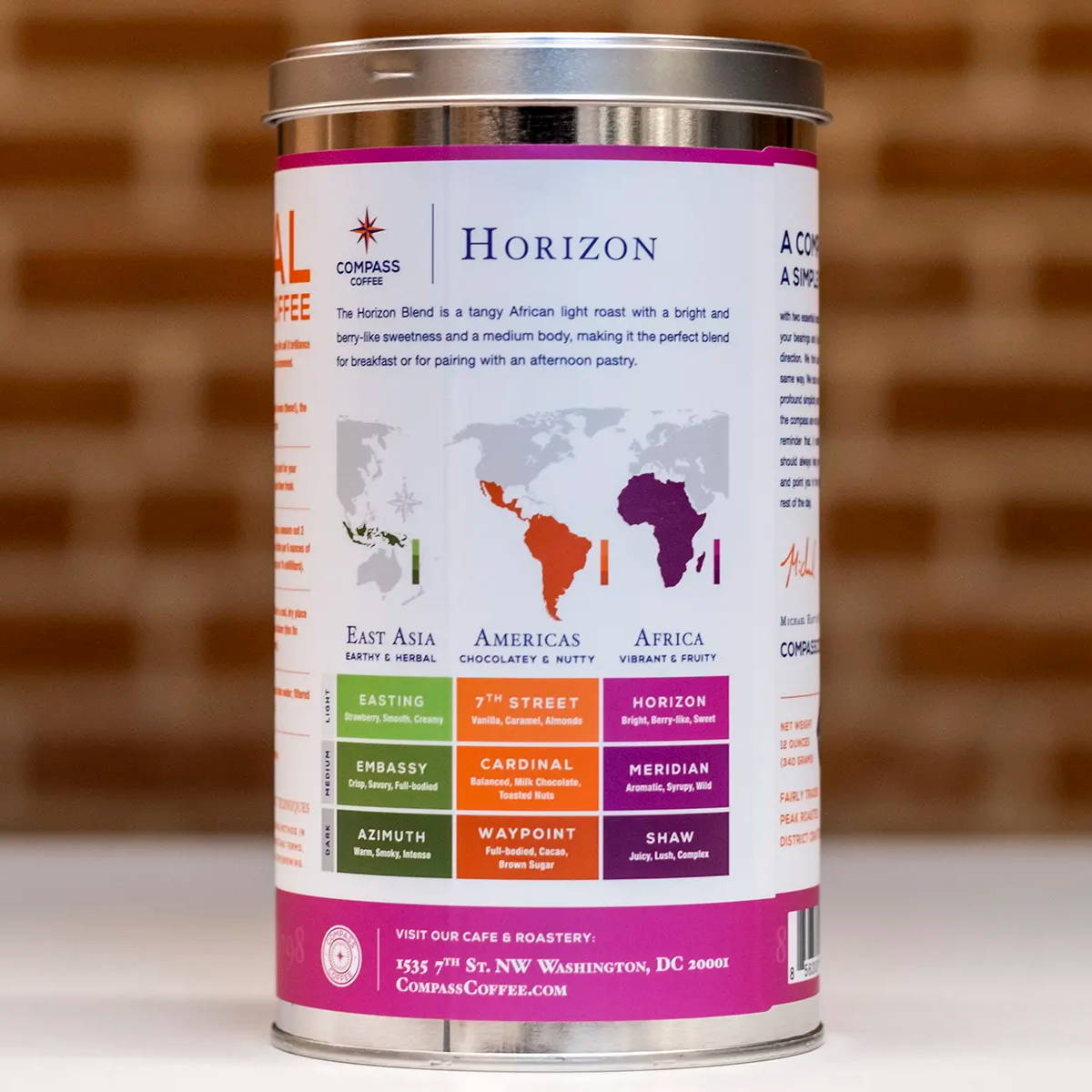 The Flavor Matrix on a tin of our Horizon Blend. Notice how it's easy to see which blends come from which regions and how roast, from light to dark, affects the taste of the coffee.

At Compass, we source beans from all over the world. Perhaps one of the most helpful tools for understanding flavor and expanding your flavor knowledge, as it pertains to different beans from different producing regions, is the Flavor Matrix, located on the back of every Compass Coffee tin and Capsule package.

As I mentioned earlier, different growing regions produce beans with different characteristics. Likewise, different roast levels produce different flavors as the sugars in the beans caramelize under the intense heat of the roaster.

The Flavor Matrix shows these differences in an easily navigable graphic. Starting at Cardinal in the middle, it’s easy to see and compare different flavors as you move from region to region and from roast to roast. With everything together, you can make decisions based on the flavors you’re interested in and compare them to the flavors from the coffee you already tried.

While there may be 110 different flavors, aromas, and textures, tasting is largely subjective and based on previous experiences. The Flavor Matrix is an amazing benchmark for comparative flavor learning, and as you can look back at where you’ve been from where you are, and as you expand your coffee lexicon you can compare characteristics. 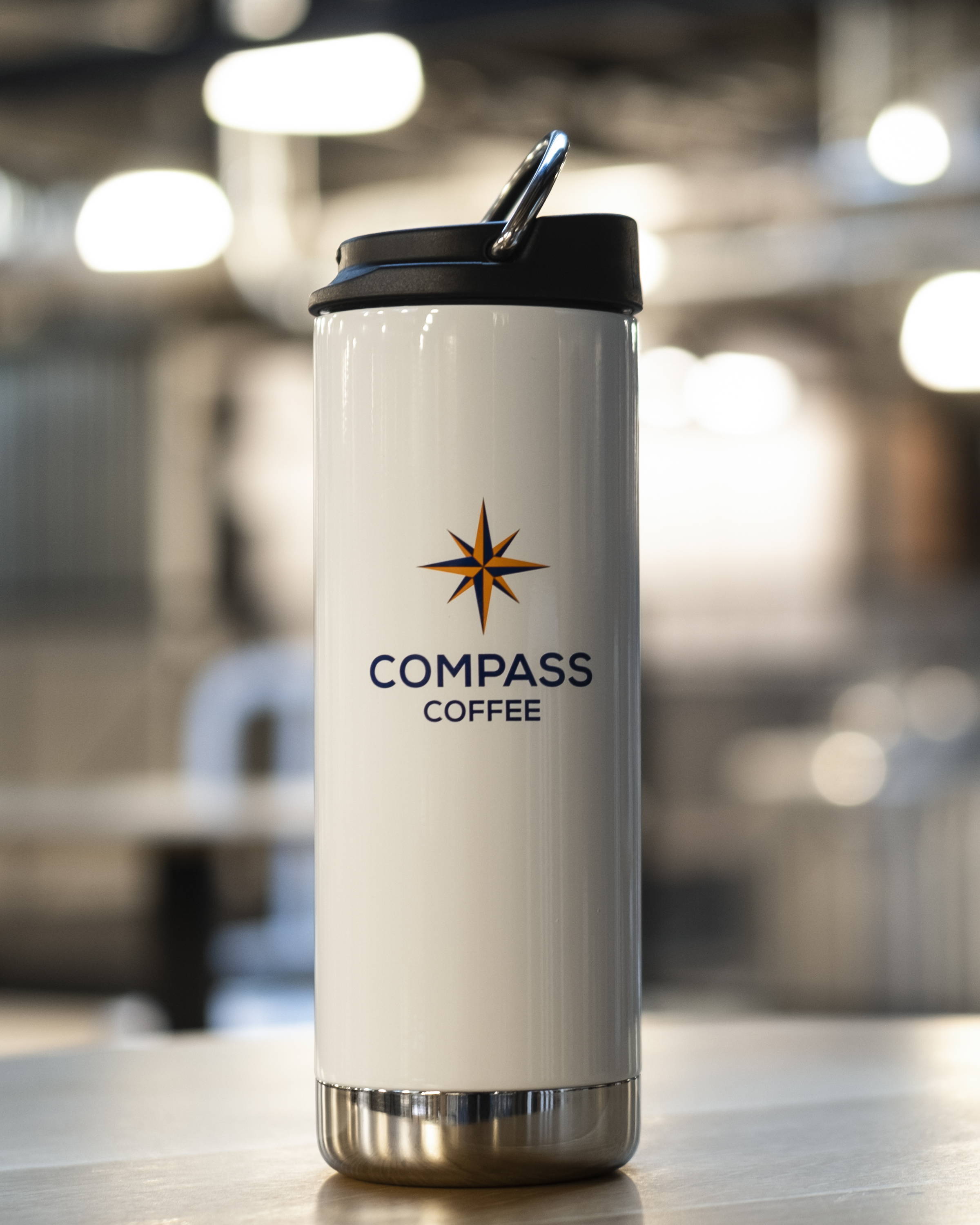 A Compass Coffee Klean Kanteen on site in Ivy City. I take this thing with me absolutely everywhere. The metal ring on top of the bottle allows me to clip it onto my bag when I'm out an about. Additionally, it fits perfectly into my bike's bottle holder.

Sustainability is huge at Compass. We even have an unofficial company mascot: the Sustainability Seal, who not only adorns every single training deck at Compass but also lives as the background on the phone of our co-founder, Michael.

We do everything we can to be as sustainable as possible. Our state-of-the-art Loring coffee roasters are up to 80% more environmentally friendly than most. Our cafes are fitted with smart, learning thermostats, we encourage the use of reusable cups and containers when possible, and we package our coffee in recyclable tins.

But, what are some ways you can be more sustainable at home?

I mean that literally.

A lot of cups.

One of the more impactful ways in which you can be more sustainable your drinking habits is by using a reusable cup or mug. I almost never leave home without my Klean Kanteen. It keeps my water cool for a long time, it keeps my coffee hot, and it stops me from throwing away 3-4 cups per day at work. Doing the quick math, if there are 252 work days in a year I would be using (on average) ~750 disposable cups per year. That’s a lot of cups.

That’s a lot of plastic.

That’s a lot of paper.

That’s a lot of waste that can be mitigated by the small decision to use reusable cups!Additionally, old, stale, and even already-brewed coffee can be used for a variety of different things around the house like fortifying your soil, making awesome skincare products, and even cooking. 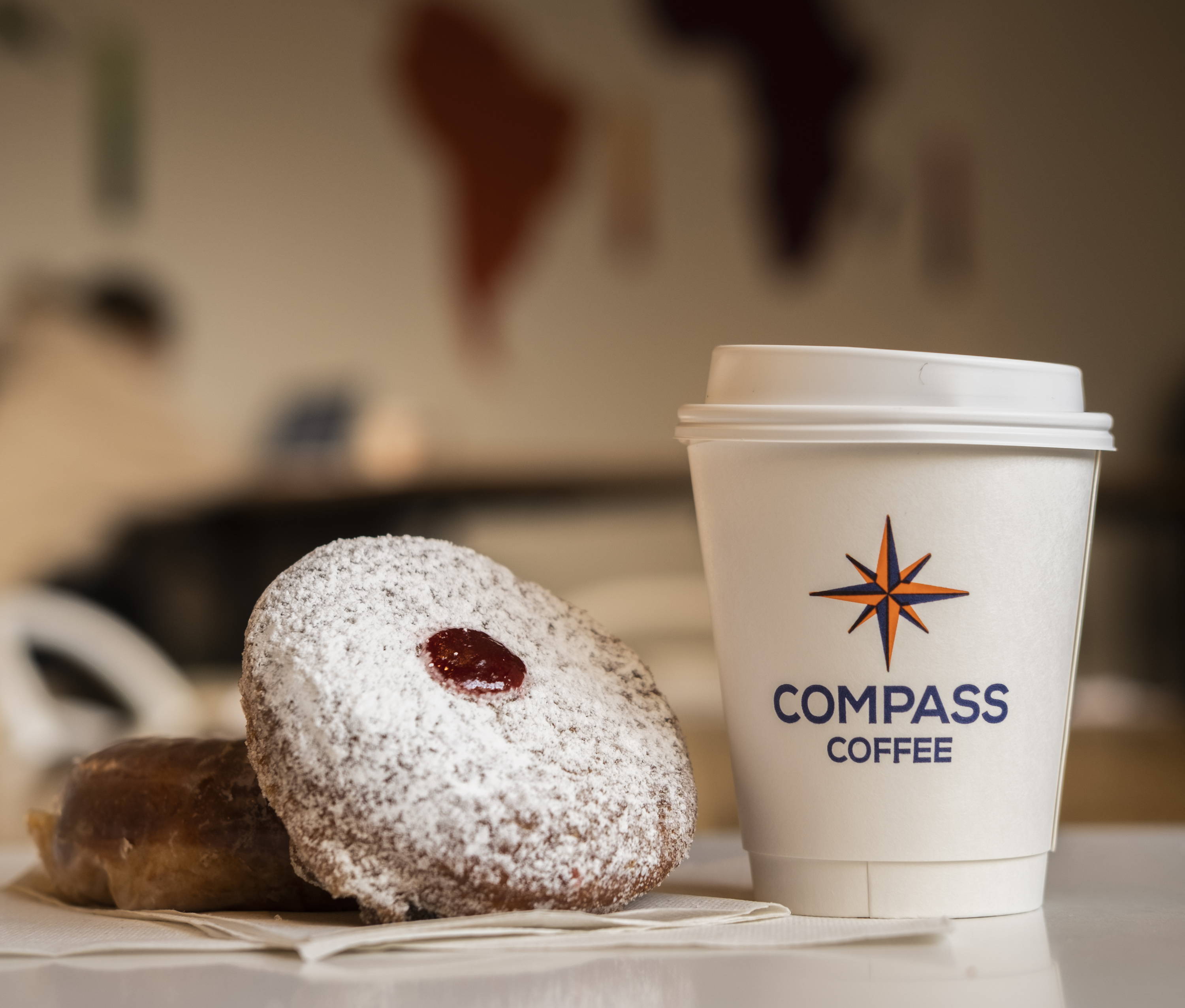 There's nothing like a hot coffee and some sweet carbs to kick off a long day in the saddle.

Drinking a cup of black coffee before you work out can improve your ability to push harder, longer. Of course, caffeine is a mild stimulant that provides an extra boost when you’re fatigued; but there are other benefits, according to Matthew Kadey’s article, “6 Truths about Coffee and Caffeine,” on Bicycle.com. Kadey mentions caffeine also “crowds out a calming brain chemical called adenosine.” The removal of adenosine makes you more alert, increases your reaction time, and makes you feel as if you’re not working as hard; as a result, you’re able to work at a higher intensity for a longer period of time. It’s no wonder why most pre-workout supplements include anywhere between 150 and 300mg of caffeine (approx. 1-3 cups of coffee); and while Bubbalicious-flavored pre-workout might sound appetizing to some, I personally would rather have a chocolatey-nutty mug of Cardinal or an oat milk cortado before my morning ride. For the best results, you should drink the coffee about an hour before your ride.

When you’re out on the road for a while, it’s easy to hit walls—particularly after long climbs. The same could be said about long runs or hours lifting weights in the gym.

If you want to maintain your energy throughout the day, energy gels and bars are a great option; the problem, however, is that most energy gels taste like fake-flavored gritty paste and a lot of energy bars taste like cardboard. (Also, I’m a fairly confident cyclist and it’s VERY hard to unwrap an energy bar while pedaling.) Not to mention, when you’re done with the energy gel, you’re stuck with it until you can stop at a garbage can unless. And you can’t exactly just put it back in your pocket, unless gunky pockets are your thing, then...more power, I guess.

Cold brew is a great alternative. As with your pre-cycling cuppa, cold brew gets the caffeine flowing, which suppresses adenosine production and increases your ability to work at a higher intensity for a longer period of time. Not to mention that, with cold brew, since you’re not necessarily worried about scalding your mouth, you can just slam it and pedal through your caffeine buzz. Now, I know what you’re thinking: caffeine dehydrates you. Well, not exactly. According to Mindy Millard-Stafford, PhD, former president of the American College of Sports Medicine, drinking coffee in reasonable doses won’t increase your trips to the bathroom and dehydrate you. Additionally, you shouldn’t need additional hydration during your ride to protect yourself from performance drain.