Coffee in American History, Part 1: From Revolutionary Fervor to the Civil War. This is the first of a two-part series exploring the history of coffee in American culture.

A long time ago, in a galaxy not so far away...

After the Townshend Acts of 1767 levied unconscionably high and unwanted taxes on goods imported to British colonies, John Dickinson, Samuel Adams, and James Otis Jr. circulated pamphlets calling on the boycott of British goods, “Letters from a Farmer in Pennsylvania” and the “Massachusetts Circular Letter,” respectively. This boycott of British goods—observed by towns in Massachusetts, Rhode Island, and Connecticut—led to increased tensions between British soldiers and colonists subsequently led to many skirmishes, property destruction, and riots culminating in The Boston Massacre in March of 1770.

By April of 1770, all of the Townshend Acts were repealed, except for the tax on tea. For patriotic colonists, buying drinking tea not only meant an increased individual economic burden but also meant supporting the crown via the taxes on the product. In the years leading up to and even during the American Revolution, drinking coffee rather than tea, was a flick of the thumb to the throne. In December of 1773, the Son's of Liberty convened in Boston's Griffin's Wharf and, disguised in Native American clothing, dumped 342 chests of tea into Boston Harbor. 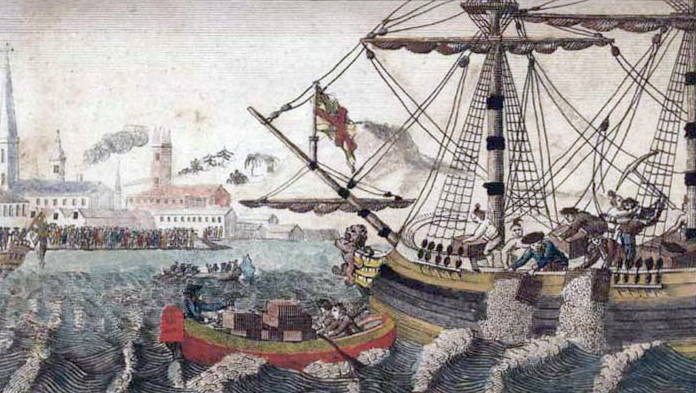 Looking for a new morning beverage, coffee was the (seemingly) natural replacement for tea. Coffee was already popular in the Colonies. In fact, it’s a well-documented fact that George Washington was an avid coffee drinker. He imported coffee and even grew some in the Mount Vernon estate’s garden. Likewise, cafes and coffee houses were very popular meeting places for people of all backgrounds. Historian Harry Schenawolf attributes the birth of American rebellion to Colonial coffee houses' open and welcoming nature. In his article for The Revolutionary War Journal, “Coffeehouses Brewed Patriot Passion in the American Revolution,” Schenawolf writes,

The John Hancocks of New England and rich plantation owners of the southern colonies, who saw their purses threatened by England’s revenue seeking agents, not only bellied up to the [coffee] bar with their peers, but sitting across the table were mekanics – artisans and working class ‘roughens’ and dockworkers who provided the clout and muscle for open rebellion. Men of all backgrounds gathered to enjoy [a coffee] and discuss the news of the day. They exchanged ideas and read aloud papers and pamphlets that in turn, often spurred action. John Adams noted that “the debates and deliberations in Congress are impenetrable secrets; but the chat of the coffeehouse, are free and open…”

In all likelihood, the mixing of economic, educational, and vocational backgrounds combined with free debates and deliberations at the coffeehouse sowed the seeds of discord which directly led to Revolutionary fervor in the Colonies. People of all ages and backgrounds were able to discuss their ideas in an open setting. The doors were always open and admission wasn’t limited to elected officials or people from well-off families. The idea of the American Democratic Process began in Colonial coffee houses. This process continues in our cafes in Washington, DC. It’s not uncommon to see people networking, discussing and debating political news, or for local politicians to use our rooms as a pseudo-town hall arena.

Though the seeds of coffee consumption had been planted a long time before, the 19th century is arguably when the First Wave of coffee begins. Coffee’s first wave marks the start of coffee as a commodity. As it became more easily produced and readily available, popularity exploded. During the Civil War, coffee was such a hot commodity that it even led to temporary truces where soldiers would exchange goods—Confederate soldiers would offer to trade excess tobacco to Union soldiers in exchange for coffee. Jon Grinspan, a curator at the Smithsonian Museum of American History, documents his discovery that “[t]he word coffee was more present in these diaries than the words "war," "bullet," "cannon," "slavery," "mother" or even "Lincoln" in his New York Times article, “How Coffee Fueled the Civil War.” For soldiers, “[c]offee was often the last comfort troops enjoyed before entering battle, and the first sign of safety for those who survived.” Future US President William McKinley would even run pots of freshly brewed coffee to soldiers on the front lines. There’s actually an official monument in Sharpsburg, Maryland, devoted to McKinley’s bravery in delivering coffee to soldiers. One Union general, General Benjamin Butler, would even advise other generals, “[i]f your men get coffee early in the morning, you can hold [the line].” That being said, the soldiers weren’t exactly drinking top shelf brews. Soldiers would grind the beans themselves. Looking at grinders from the era, I came across this gem: a Civil War-era carbine with a hand mill built into the stock. Though it was originally meant to grind meal to feed horses on the front lines, soldiers used it to grind coffee for their morning brew. According to some sources, the Sharp's "Coffee Mill" Carbine is one of the most counterfeited items of the Civil War Era. 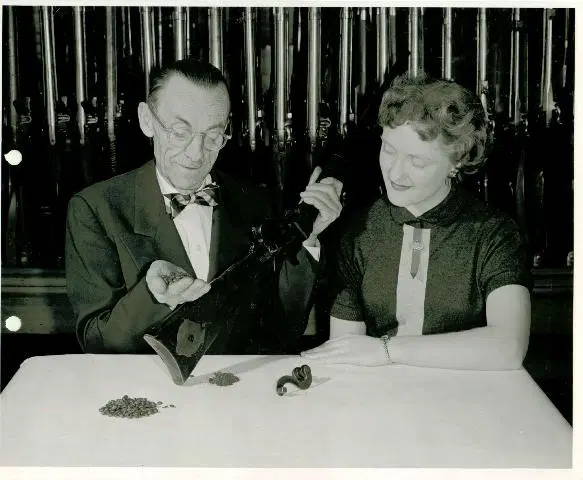 With the Sharp's "Coffee Mill" Carbine, soldiers would put coffee into a special compartment built in the carbine's stock and crank a handle to grind coffee into a fine powder for brewing.

They would often make coffee “with water from canteens and puddles, brackish bays and Mississippi mud — liquid their horses would not drink.” Still, regardless of the quality of coffee it reminded soldiers of home, and provided a sense of normalcy and comfort for the troops, which boosted troop morale.