Understanding the Weird History of Decaffeinated Coffee and How It's Made It’s well-known that Compass appreciates decaf drinkers; after all, decaf drinkers are drinking coffee for the taste alone. With this in mind, our roasters really go the extra mile to ensure that only the highest quality decaf coffee and espresso makes its way to your cup. But have you ever wondered how coffee is decaffeinated?

It’s well-known that Compass appreciates decaf drinkers; after all, decaf drinkers are drinking coffee for the taste alone. With this in mind, our roasters really go the extra mile to ensure that only the highest quality decaf coffee and espresso makes its way to your cup. But have you ever wondered how coffee is decaffeinated?

When Ludwig Roselius’s father died at the age of 59 in 1902, the physician attending Roselius’s father explained that the cause of death was due to the amount of coffee the deceased drank every day. Thus began Roselius’s lifelong pursuit of decaffeinated coffee.

You can almost picture the Wes Anderson version of this film, complete with a Nazi subplot.

Today, Roselius is known as the father of decaf coffee and some of the methods he pioneered at the turn of the century are still in use.

I should start by mentioning that decaffeinated coffee doesn't come from a special plant. And as with some of the best things in life, decaffeinated coffee was discovered completely by accident. According to legend, after receiving a shipment of coffee beans that had been subjected to and submerged in saltwater, Roselius noticed that the caffeine content had been greatly reduced though, aside from a terrible saltiness, the flavor of the coffee hadn’t been altered. Caffeine, Roselius realized, was water soluble; therefore, by saturating beans with water and flushing the beans with different chemical solutions which bonded to the free-floating caffeine, Roselius could greatly reduce the caffeine level of coffee.

To this day, all decaffeination processes gorge raw green beans to prepare for caffeine extraction.

Roselius brought decaffeinated coffee to market in Germany, under the name of Kaffee HAG, around 1905 and later expanded throughout Europe. Though you may never have heard of Kaffee HAG, it’s entirely possible you’re familiar with Kaffee HAG’s French arm, Sanka, which is a modified contraction of the French phrase for decaffeinated: sans caffeine. 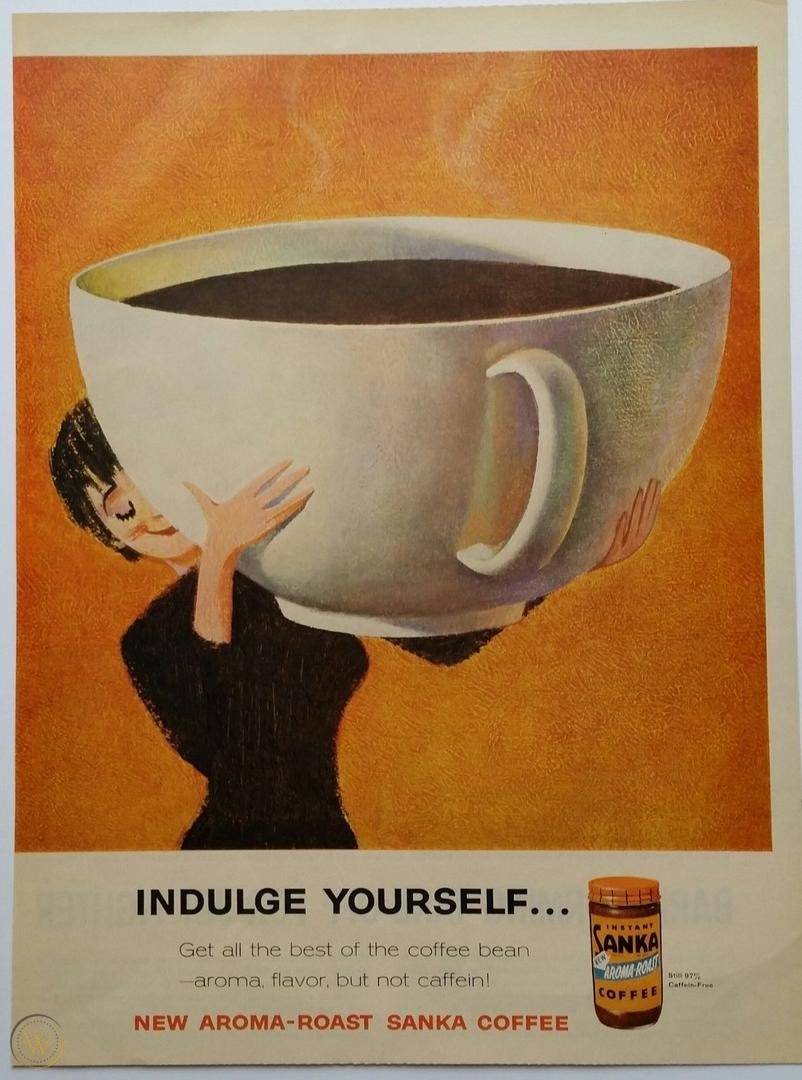 An advertisement for Sanka instant coffee, a descendant of Roselius's first decaffeinated coffee.

Initially, Kaffee HAG used a direct solvent decaffeination process, which involved steaming raw coffee beans until they were completely saturated with water. During steaming, the beans actually double in size. Once the beans are completely engorged with water in a tank, the water is drained, then the beans are flushed with a benzene solution. Today, we use different chemicals as we now know that benzene is a carcinogen. After the beans are flushed, they are set to dry and return to their normal size before being packaged and sent to roasters and production facilities.

Later, Kaffee HAG developed an indirect solvent decaffeination method. This method proved to be more popular and is the base of the other two decaffeination methods, as well. In this method, the beans are soaked in hot water for several hours, essentially making a raw coffee tea. The water is then drained and moved to a separate area, where it is treated with solvents meant to purify the water of caffeine molecules. This process is repeated several times, until the beans’ caffeine is dissolved.

In a way, indirect decaffeination resembles washing rice. You add water, scrub the rice, and drain the water, repeating the process until the water runs clear. (Anecdotally: if you’re not washing your white rice before cooking, I would totally recommend starting. It’s like a night and day difference in taste and quality.)

Around the same time Roselius was applying to be a card-carrying member of the National Socialist German Workers Party, aka the Nazis, a third decaffeination process was being developed in Switzerland using indirect extraction; however, unlike Roselius’s methods of decaffeination, this Swiss Water method didn’t use chemical solvents in the decaffeination process. Though the Swiss Water method has been around since the 1930’s, due to inconsistencies in the final product, the process wasn’t commercially viable until the late 1970’s. After many years of trial, error, and process refinement, the Swiss Water Decaffeinated Coffee company was able to produce a decaffeinated coffee that tastes nearly identical to its caffeinated brethren, with 99.9% of its caffeine content removed.

The Swiss Water method is incredibly complex and kept incredibly close to the chest. I am going to try and explain it as well as I can; however, I should point out that, although I have a Master’s degree in Literature, I got pity-passes in Bio 101 and Bio 102 back at Rutgers (thank you Drs. Maiello and Morrison). What I mean, of course, is that I am typically not the most scientifically-minded person in the room and this is going to be a very basic explanation of the Swiss Water process.

The Swiss Water method, at its absolutely most basic core, functions similarly to osmosis. Green, caffeinated, coffee is washed, scrubbed, then fully hydrated with pure water. A mixture, known as Green Coffee Extract (GCE), is introduced to the caffeinated beans. GCE is a mixture containing everything in green coffee, sans caffeine. When placed with the prepared green coffee, caffeine molecules, seeking balance, make their way from the caffeine saturated green coffee to the caffeine deficient GCE. Once an equilibrium is reached, the GCE is flushed from the tank and passes through specially-designed carbon filters that remove the caffeine from the GCE. The GCE, now completely empty of caffeine, flows back into the green coffee tank.

This process is repeated for about 10 hours, or until 99.9% of the caffeine is removed from the green coffee beans.

The last method of decaffeination is, by far, the coolest sounding of the lot, Supercritical CO2 , which sounds like a rejected demo from Muse’s “Supermassive Black Hole” era.

This process starts like all the rest: caffeinated green beans are added to a large vessel and are hydrated to prepare the caffeine for removal. Once the beans are fully hydrated, they’re sealed and pressurized to roughly 250-300 times atmospheric pressure. At this pressure level, carbon dioxide takes on interesting characteristics. As Fergus Clydesdale, head of the Food Science Department at the University of Massachusetts at Amherst, notes, “Supercritical carbon dioxide has a density like that of a liquid, but its viscosity and diffusivity are similar to those of a gas.” These unique characteristics allow the carbon dioxide to move through the caffeinated beans and soak up all of the caffeine molecules. Once the carbon dioxide is fully saturated, it moves into another tank where it is pushed through activated charcoal to filter out the caffeine. Once fully cleaned, the CO2 is recycled back into the hydrated beans. The Supercritical CO2 method is the most cost intensive method, but is able to process large amounts of coffee to a level of 97% caffeine-free. 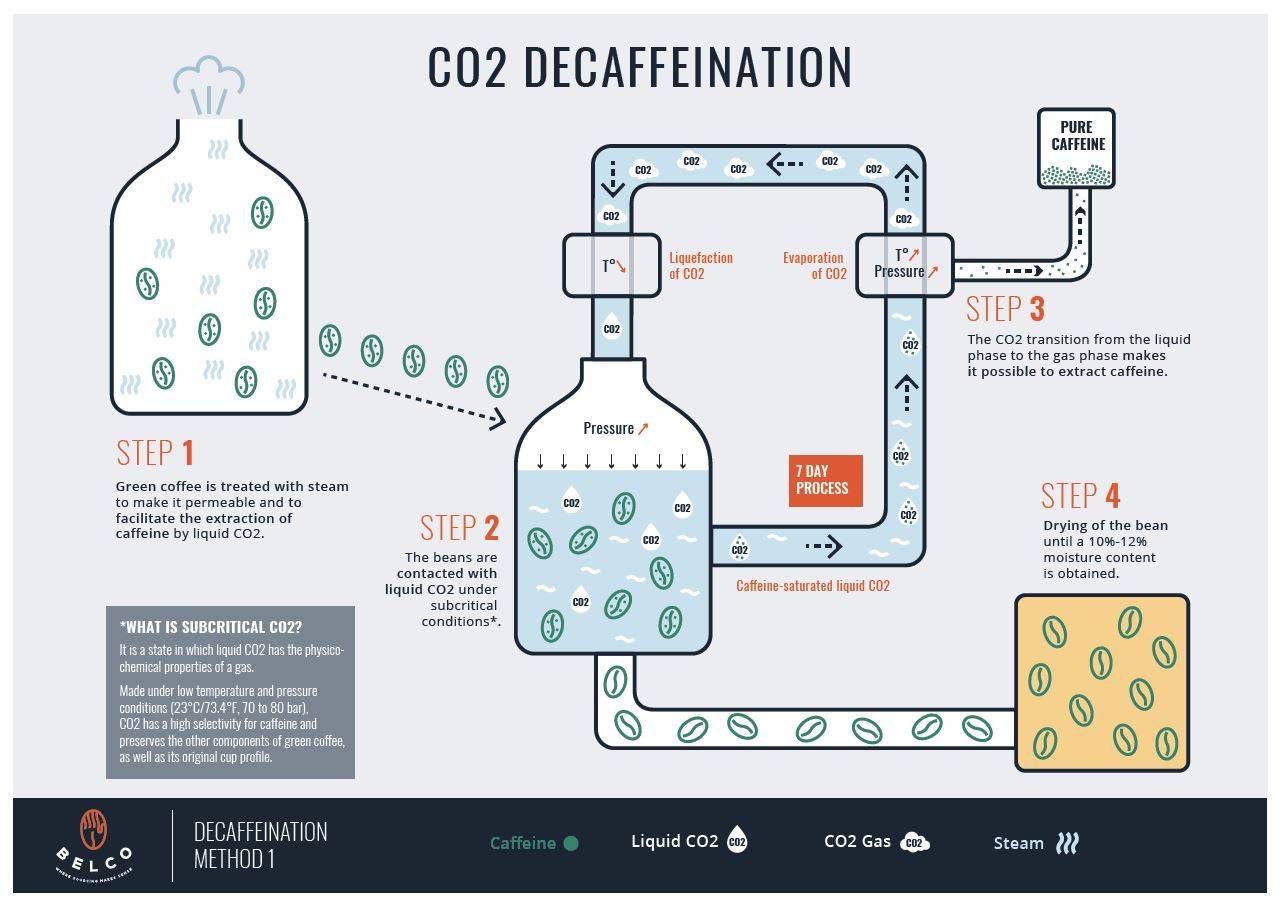 I mentioned Decaffito earlier in this post. I purposely didn’t include it in the decaffeination method discussion, as it doesn’t involve removing caffeine from already-caffeinated beans. It’s a bit more in-depth than that. While the fruits of the coffea arabica and coffea canephora plants are naturally caffeinated, there are, in fact, coffea varietals that contain no caffeine such as Coffea charrieriana. The issue is, these naturally decaffeinated varietals aren’t very palatable. In making Decaffito, the producers rely on horticultural science to breed out the caffeination gene from coffea arabica and leave only arabica’s tasting qualities. It’s a way of producing naturally decaffeinated beans.

What’re your thoughts on decaf coffee? Have a favorite decaf drink at Compass? Share it in the comments below!

SHOP OUR DECAF CARDINAL!
Shop Now
Previous
A Glossary of Useful Coffee Terms
Next
Compass and Union Kitchen: A Springboard for the Growing DC Food Scene